Andy is available to speak at your next event on Marketing Strategy.

Andy Valadez, President and of Marketing Dynamics is a man on mission.  He answered the call of service to our nation after the bombing of the Marine Barracks in Beirut on October 23, 1983, where 241 servicemen were killed.  He along with three other classmates enlisted in the United States Marines Corps after they lost a high school friend LCpl Timothy McMahon who was killed in the attack. Andy served from 1988 to 1992 with the 4th Marine Aircraft Wing located in New Orleans, Louisiana, during Desert Storm/Desert Shield.

“I was very fortunate to not have served in combat, but things got really scary during that time.  We were asked to be ready. I pray for the Gold Star and Blue Star Parents and those currently serving in harm’s way,” says Andy.  During his service as a United Diary Clerk (admin) helping over 350 Marines at his post, Andy also volunteered in the community, served in the Headquarters Marine Color Guard, Auxiliary Anti-terrorist Security Force, Taylor’s Kids, and was the driver for visiting Generals.  In addition, he attended Tulane University at night to secure an Applied Business Certificate.

While in service, he was accepted in the Marine Enlisted Commissioning Education Program (MECEP) where 350 Marines applied and only 66 were selected nationally.  His plans were to become a Marine Officer and fly Cobras for our nation.  Six awardees were cut due to cut-backs and Andy was unable to attend Officer’s Candidates School. 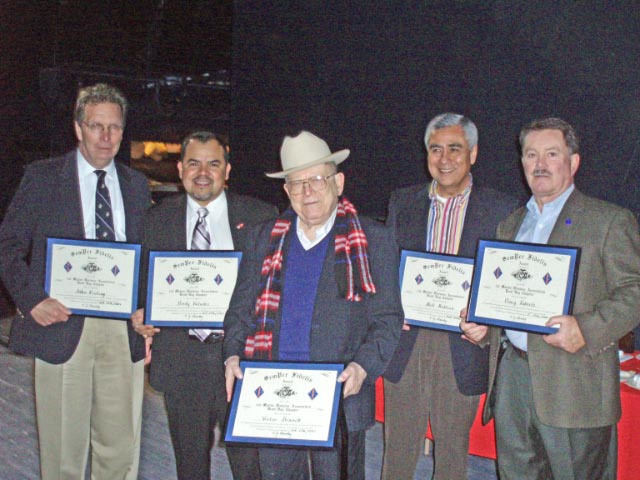 Numerous awards were presented to Andy for his military service including Rifle and Pistol Expert Badges, a National Defense Medal, Good Conduct Medal, and numerous “thank you” letters and Certificates of Commendation.  He was recommended for meritorious promotion to Corporal and Sergeant before leaving the Marine Corps to attend Texas A&M University, where he graduated with a BBA degree in Marketing in 1993.

Left to right:  Kenna, Tina, myself and Kayla

Marketing Dynamics was founded in 1999 in Houston, Texas.  The goal of the company was to service start-ups, help businesses grow, and teach the value of strategic marketing by sharing its expertise with clients and business associates.

Andy cultivates his relationships with a growing list of media personalities, movie directors, screenwriters, and other key business leaders.  He has been featured on the hit radio show, The Business Makers Radio Show (a show he helped get on the air), recently on “The Wealth and Power Hour” with Harlon Pickett (KSEV 700), “RightSide of the Mic” with Doc Greene, “Price of Business” with Kevin Price, “The Word on Fearless Networking” with Ken Marsh, “Life, Business, and Money” with Steven Kay, “RightSide of the Mic” with Doc Greene, quoted in the Houston Chronicle and Business Journal, on television and web radio.

Andy continues to volunteer in the community helping his local church, American Legion, the Marine Corps League, the Texas Veterans Museum, Inc. (former board member), various not-for-profits, Native American causes, the liberty movement, advising media personalities concerning issues of faith, family values, and principles of marketing to help their broadcasts.  He has volunteered to teach karate, mentored the homeless at Open Door Mission, counseled the youth at Juvenile Bootcamps, and has been involved at his daughter’s school for key events in their youth.

“I worked for Dillard Department Stores after college in their Executive Development Program,” says Andy, “I later worked for Toshiba International but was downsized in 1999, and that is when I started my company. I have never looked back and have been very fortunate to still be doing what I love.”